Your password will be send on your Mobile & Email address

Verification code will be send on your email & mobile 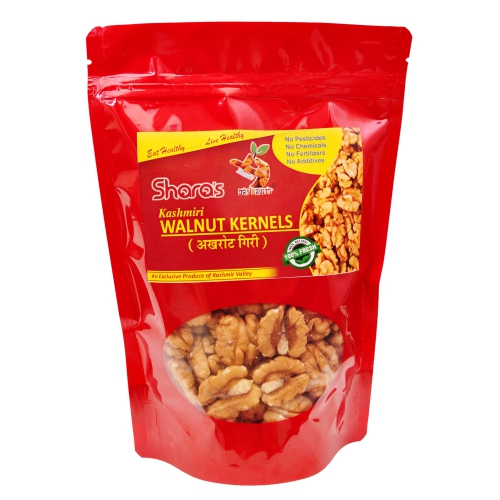 The walnuts of Kashmir Valley are widely known for their great taste and quality, and are demanded worldwide. The plantation of walnut is done by seedling and with a very little effort bestows plentiful nuts. The advantage of walnut is that it has long shelf life than other nuts. Best Thing about Kashmiri Walnuts is the Fact that they Are Organic. No Chemical Fertilizers Are Used In the Process Of Growing Walnuts in J&K Valley.

Walnut trees thrive best in the hilly regions, like the ones of northwestern Himalaya including Jammu and Kashmir, Himachal Pradesh, Uttarakhand and Arunachal Pradesh. Jammu and Kashmir is the main hub of commercial production of Walnut in India. Kashmir enjoys its status as major contributor to the export of walnut from India. Walnuts grown in Kashmir valley are certified as the organic.

The walnut tree belongs to the family of Juglandeae and its size is very large and its height ranges from 50 to 75 feet. Walnut trees are favorably grown in the areas falling between the altitudes of 5000 feet to 8000 feet. The rich taste, flavor and aroma are indeed unique and delicious. This is why this fruit fetches high demand within the country as well as from rest of the world. In Kashmir, walnut trees are plentifully grown in Kupwara and Shopian region. In recent past, Shopian was the largest walnut growing region in Kashmir and but now Kupwara has overtaken Shopian and commended as the largest Walnut producing area. Walnut in the form of fruit and wood are highly in demand and Kashmir is the prime exporter of walnuts in India. Walnuts are the oldest tree food known to man. Indian walnuts of Kashmir are known to their unique taste and flavor.

Walnuts are a delicious way to add extra nutrition, flavor to your meal. While walnuts are harvested in October and has a great source of those all-important omega-3 fatty acids. According to the researchers,'' Walnuts ranks above in all peanuts, almonds, pecans, pistachios and other nuts .'' A handful of walnuts contain almost twice as much antioxidants as an equivalent amount of any other commonly consumed nut''. Antioxidants in walnuts were 2 to 15 times as potent as vitamin E renowned for its powerful antioxidant effects, which protects the body against damaging natural chemicals involved in causing diseases.

Shara’s Dry Fruits brings to you the rich quality of dry fruits which are 100% natural and fresh. Shara’s Kashmiri Walnut Kernels are 100% Natural, Organic and Fresh. Our Walnut Kernels (Akhrot Giri) are hand packed in special zipper Pack which is re-sealable, so that you can keep them fresh and natural for long time, even after opening them. While packing the Walnut Kernels we take all care to maintain its freshness and hygienic conditions and to retain its freshness till consumption. We pack and deliver premium quality Walnuts/Snow white walnuts Kernels to our valuable customers.

We Use The Old Age Technique Of Sorting And Selecting The Best Of Nuts & Dry Fruits By Hand.

If you arent satisfied with this product, return it for a refund. 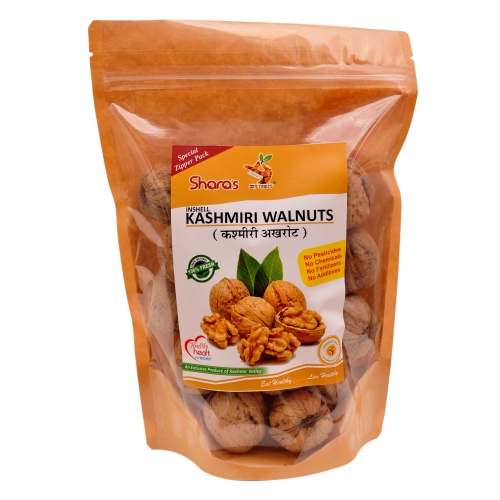